The final Western Australian auction of Murray Grey bulls for the summer of 2015 was held during the Midlands Cattle Breeders Association Sale held at Gingin on Thursday the 5th March 2015 when Raymond Park, Mungatta and Mt Hill studs sold 12 bulls on the day.

The result being 7 Mungatta Murray Grey bulls sold for an average of $3,820.

Rounding out the Murray Grey catalogue with the sale of 2 bulls was Alan Heitman of the Mt Hill Stud when V.R & J.R Shallcross purchased Mt Hill AJH J8 for $3,000.

A second bull sold for the same value giving Mt Hill an average of $3,000.

On the 24th February 2015, the Narrogin Invitation Bull Sale was held with 2 Murray Grey vendors selling on the day.

A stable mate also sold for the same figure resulting in a $3,000 average for Wundam Park. 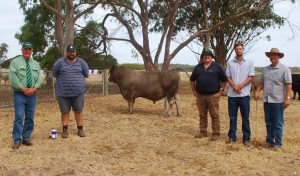 THE all important shades of grey came into play at the Melaleuca on-property Murray Grey sale when a dark bull topped the offering at $9250 and other dark colours were unusually favoured over their silver counterparts.

Murray Grey breeders have generally been prejudiced against dark bulls and top price buyers Michael McGuire and son Jake, Manypeaks, have used it to advantage in the past to get cheaper bulls.

Jameson was by the well proven sire Melaleuca Alby A211 and was one of only two bulls by Alby on offer.

Melaleuca stud master Richard Metcalfe, Manypeaks, described it as a terrific carcase bull that was developing an outstanding hindquarter.

Its excellent make and shape was combined with the best set of weight gain figures in the catalogue.

Jake McGuire said the figures pointed to good early growth and after eight years buying bulls from his near neighbour they were confident in their purchase.

The men run about 350 breeders joined to Angus and Murray Grey bulls and, as the calves were turned off to the Jarraluka feedlot, colour was of no importance.

It was not the case for stud breeder Barry Macdonald, Winton in the New Zealand South Island, who was at the sale on one of his regular biennial contact visits to WA.

He did not buy for himself, but said if Jameson had been a silver bull he would have bought it.

Instead he was entrusted with the task of buying a sire for Tasmanian stud breeder Charles Wallace, Woodbourn, Cressy, Tasmania, and chose another dark grey bull in Melaleuca Jackhammer J115.

They had been attracted to Melaleuca after hearing good reports from the stud’s field day and when they arrived with their local stock agent Jamie Abbs they were pleased to find a good line of bulls that were presented well without being overdone.

Colour was not a factor in their decision, with Steven Lee-Steere saying previous grey bulls used in their 220- head breeding herd tended to throw a good percentage of silver calves.

Landmark auctioneer John Wirth said he’d been selling cattle for a long time and had never seen the market as buoyant as its present level.

He said despite the good market conditions buyers were careful in their spending.

The final tally showed a strong result with 29 bulls sold under the hammer for a $4388 average.

The clearance rate lifted to 32 bulls in post-sale negotiations.

Landmark southern livestock manager Bob Pumphrey said it was good to see the support of people who knew how the cattle performed and kept coming back.

wanted. “We have a loyal group of clients and we try to breed the cattle they need and keep a good commercial focus with good temperament,” he said.

They snapped up a cheapie at $3500, to go with a more expensive Murray Grey bull bought the previous day.

Ms Whale said they intended to use it in the stud herd because it offered a different type to their own cattle.

The silver bull Melaleuca Jeff J181 was particularly smooth through the front end and had the potential to breed good females.

Jeff Pyle & Co, Manypeaks, paid a $5000 top and bought two others at auction for $3500 before fulfilling their requirements by buying another two privately.

Fred Mountford, Manypeaks, Bruce Mattinson, Albany, and the partnership of AG Thomas and DJ McMahon, Bremer Bay, each bought a single bull for $5000 to be among the top price buyers.

The Western Australian Supreme All Breeds bull sale was held on 19th February,2015. Murray Grey breed was represented by 2 studs, both selling 2 bulls each.
Harris Thompson of the Mighty Murray Grey stud sold Mighty Jager HT1 J2 to Owen Roberts of Collie for $4,750 giving an average of $4,500 for 2 bulls sold.
Cameron Harris of Nangara Murray Grey stud sold his first bull to the Young family of Manimup and averaged $3,000 for his bulls sold.