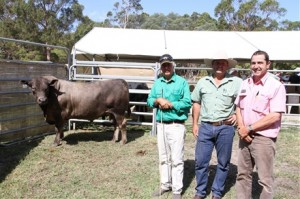 STRONG support from a long list of return and new buyers, a quality line-up of bulls and a strengthening cattle market all combined to ensure an impressive result at last week’s Monterey annual bull sale with prices hitting a high of $9750.

Like many sales this season, Landmark auctioneer John Wirth and Elders auctioneer Gary Preston found the going easier in terms of extracting bids from buyers compared to last year, which was no doubt a result of the cattle market being in a stronger position.

And this buyer willingness to bid was certainly noticeable when all the important figures were calculated.

This meant both the clearance, average and most importantly the gross figure, were up significantly on last year, the average jumped $392, the clearance increased 18 points and the gross was up $85,500.

Speaking after the sale Mr Wirth said the quality of the bulls was magnificent from start to finish and buyers appreciated that quality.

“The first run of Murray Greys, were very, very strong however buyers became selective on the second run and this allowed volume buyers to pick up their bulls more easily,” Mr Wirth said.

“The Angus were also very even and sold strongly from start to finish.

“The sale again attracted a cross section of buyers from across the State and some interstate interest.

“All in all it was a very solid sale, with buyers putting their hands into their pockets in recognition of the quality of bulls on offer.”

Elders stud stock manager Tim Spicer said it was a very solid sale, with a lot of support from the close to 60 registered buyers.

“The quality on offer was very high and the Bullers need to be congratulated on the presentation and temperament of the bulls,” Mr Spicer said.

“The top bulls made great values and were well sought after.

“The first run of Murray Greys and the Angus had strong competition from buyers covering a wide area of the State.

“However buyers were a bit more selective in the second run of Murray Grey bulls and this allowed volume buyers to average back their teams later in the sale.”

Buyers were not afraid to bid up on the Murray Grey bulls which best suited their requirements and this resulted in the clearance rates lifting on last year.

But the most important figures of clearance and gross, or the money that goes in the bank, were both up – the clearance by 11 per cent and the gross by $17,750.

The strong line-up of Murray Grey bulls were like peas in a pod in terms of quality and picking a standout bull wasn’t easy.

But in the end buyers showed their preference for Monterey Harmony H62 in lot eight when it entered the ring.

Bidding started at $4000 on the April 2012-drop long, deep, grey sire and quickly rose until only two serious contenders were left.

In the end it were return buyers Ian and Narelle Willcocks, Ayr Park Murray Grey stud, Woodstock, New South Wales, who were written in as buyers after giving buying instructions over the phone to Landmark Boyanup agent Chris Waddingham.

After looking through the catalogue, Mr Willcocks said the bull was one of six shortlisted for its description and figures but was picked out after seeing photos sent by Gary Buller.

He said the bull arrived at their property on Monday morning and he was very happy with it.

“We wanted to keep the grey pigmentation coming through,” Mr Willcocks said.

“He fitted the criteria that our commercial clients look for in moderate frame, good muscling and softness and doing ability.

“He had good raw data with 114cm2 eye muscle, weight for age with a +77 for 600-day weight and low birthweight with a tight sheath and soft coat.”

These figures ranked Harmony in the top one per cent for 600-day weight and EU heavy steer index and top 10pc for 200 and 400-day weight, vealer terminal index and supermarket index.

Another return buyer not afraid to bid up after achieving top results with Monterey genetics was Hampden Farms Pty Ltd, Brookhampton, which has just registered a Murray Grey stud under the name Hampden Farm.

It secured Monterey Hummer H77 in lot three in a three-quarter share and possession deal for $8000, the equal second top price in the Murray Grey run.

These figures ranked Hummer in the top one per cent for 400 and 600-day weight and EU heavy steer and supermarket indices and top five per cent for 200-day weight, carcase weight, EMA and vealer terminal index.

Hampden Farm manager Mick Gray said it was the size and structure of Hummer which appealed most.

“He is a big, well-structured bull with good growth,” Mr Gray said.

Hummer will be used in the operation’s stud herd over females purchased from the recent Monterey mature female dispersal sale.

Securing the second bull to sell for the $8000 equal second top price were return buyers Mark and Karen Forrester, Kanandah station, Rawlinna, when they purchased Monterey Hendrix H44 in a three-quarter share and possession deal.

“He has good milk, fantastic growth and a good IMF figure, which is important to us because it affects meat quality,” Mr Forrester said.

“He is a nice young bull with a good constitution.

“We will use him over our better cows to breed replacement females.”

Hendrix was joined by another seven grey sires bought by Kanandah station at the sale for an average of $4906.

They will be used over a 3000-head breeding herd of Murray Grey and Murray Grey-Brahman cross females.

Mr Forrester, who has been buying from Monterey for 12 years, said the genetics suited their operation which involves marketing a certified organic beef product from the station which was sold predominantly into the local market as well as the international markets.

“We have been producing the certified beef for five years and we work in a fair bit with Warren Pensini, Blackwood Valley Beef,” Mr Forrester said.

Also not afraid to bid up on their preferred bulls early in the sale were return buyers Chris and Daryl Avery, WC, BE and DC Avery, Nannup.

Their purchases started early when they secured the 912kg, long, muscly Monterey Hogan H91 in lot one and the deep-bodied, long Monterey Himalaya H158 in lot nine both at $7250.

The Averys rounded out their purchases buying two more bulls at $5500 and $5000.

Busselton operation RH Norman & Son, was another not afraid to show its support for the Monterey Murray Greys when they purchased the 850kg, soft Monterey Economist son, Monterey He Man H21 for $6500.

The Busselton operation also purchased another two Murray Grey sires during the sale for $5000 and $3750.

Back again at the sale this year, after achieving good results with Monterey genetics was Wuluru Farms, Dunsborough, which secured three silver sires and one grey sire to a top of $4750 and an average of $3813.

Also buying strongly in the Murray Grey run to a top of $5000 and an average of $4000 for a team of three was Lake Muir Prime Beef, Lake Muir. 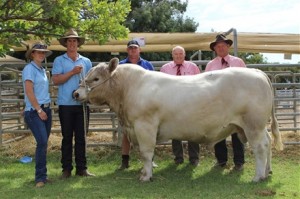 SOUTHEND prices headed northwards at the stud’s on-property bull sale last week, recording one of its highest top prices at $9000.

Stud principal Kurt Wise was thrilled with the result, particularly the top end of the bull catalogue and said it was encouraging to see many clients returning for their Murray Grey bull requirements.

He reduced this year’s offering from 38 to 32 bulls, selling 21 of them to gross $95,500, with the first 17 being sold consecutively as a result of fast-flying bids from the 26 registered buyers.

It wasn’t just the $9000 top price making a large leap on other years – the entire Murray Grey bull offering averaged $4548, an increase of $576 on last year’s average.

A great season in the Katanning area, complete with ample spring rains that delivered plentiful feed, meant the quiet, soft, well-grown bulls were in excellent condition on sale day.

The first six on offer were led bulls that stood by contentedly while they attracted a lot of attention before the auction got underway, with the stand-out third bull into the ring earning a tick in everyone’s catalogue.

Under the hammer of Elders auctioneer Gary Preston, the exceptional bull was knocked down for the $9000 price tag after two buyers fought it out, each of them reluctant to be the one to miss out.

Describing the bull as an absolute beef machine, Mr Marsh was willing to go the extra mile for the extra length Hammer would inject into his 85-head Murray Grey breeding herd.

“He just has an excellent thickness right through from his shoulder to his rump,” Mr Marsh said.

“Not only does he have that deep body, he is also very structurally correct.

“I’ve used the same bloodline before and had a lot of success, so I was very keen to buy him.”

The particular bloodline he was referring to was Hammer’s sire, Southend Braveheart, which became an ideal combination with dam Southend A Cleopatra, which is renowned for producing a great calf every year.

Mr Marsh will use his only bull purchase over his heifers and also some hand-picked older cows, with the aim to slowly build his cattle numbers to 110 breeders with quality genetics.

The second top-priced bull was one of the youngest in the catalogue with the stylish July 2012 drop calf, Southend Hercules, purchased by Mark Hay, Hayday Pastoral Co, East Perth, for $8500.

Showing excellent growth for age, Hercules was also sired by Braveheart and was the full brother to last year’s top-priced bull.

Hercules was the only bull Mr Hay purchased at the sale, but he couldn’t pass up the opportunity to buy a female package deal, purchasing a silver Murray Grey cow with a silver heifer calf at foot for $2000.

The cow was tested pregnant to the same bull that sired Hercules, Southend Braveheart.

The volume buyer of the sale was MH Collins & Co, Nyabing, who bought three bulls to a top of $5250 for the second bull in the ring.

They followed with two more, paying $3000 for the lengthy Southend Harley before finishing with Southend Hell Boy for $4000.

Getting the sale off to a flying start was CA Farmer & Co, Boddington, who made sure he was holding his bidding card up the right way to purchase the first bull for $5250.

Boyup Brook producers RP Bass and KR Pinch were chasing one of everything, starting with a powerful sire for $5500 before moving their sights onto a beautiful cow and calf unit.

Southend C-Reflection was a middle-aged cow in its prime, which had a proven breeding ability and excellent milk traits that became evident when buyers saw the well-grown silver heifer calf at foot.

When it came time for the three lines of 10 heifers to enter the pen, it was John Imberti, Pallinup Contracting, Gnowangerup, who wanted to boost his female population with young genetics, snapping up all 30 of the unmated Murray Grey heifers.

Born between February and June, the heifers were eight to 12-months and Mr Imberti paid a top of $1100 for the first 10, $760 for the second line and $700 for the third to finish a successful sale.

Elders auctioneer Gary Preston said the quality of Murray Grey bulls and females continued to improve each year, with the top end of the catalogue selling well.

“There was a very good presentation of bulls and the first half sold tremendously,” Mr Preston said.

“Buyers became more selective towards the end of the offering but overall it was a great result.” 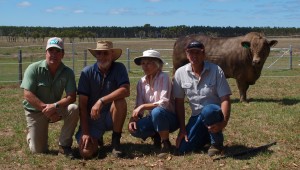