Gary and Julie Buller were pleased their sixth annual on-farm sale attracted many long-time supporters throughout WA and the Eastern States.

“Buying top sires from grass operators that we know and respect has been the easy-doing advantage of our cattle,” Mr Buller said.

Good support also pushed the offering of 10 registered PTIC Angus cow/calf lots to a stud records including a top price of $12,000 and average price of $7389 for nine three-in-one units sold.

Acting on behalf of Hampden Farm principals Gervase and Janice Purich, of Brookhampton, Mr Grey said his selection was “nothing but the best”.

“Momentum was our first pick for his style and robust quality, muscling, length and exceptional overall balance, which will have a dramatic impact on our breeding program,” he said.

“We are running 60 registered cows which supplies bulls for our 300-head commercial herd, but plans are in place to sell more Murray Grey bulls to producers as we build the stud.”

Momentum was offered ¾ share and possession and Mr Buller said M24 was a brilliant son of Monterey Steamroller B140, which produced the stud’s top females.

Other Murray Grey bull buyers included commercial cattleman John Inberty, of Silverstone Livestock, Napier, who secured the 962kg Monterey Montezuma M205 for $16,000, a bull which made the grade according to the under bidder, Tullibardine stud principal Alastair Murray.

Commercial cattleman Chris Avery said cattle prices were holding taking into account the 20-year average, but he was unsure of how values would play out with the current build of global cattle supplies.

In the Murray Grey female offerings, repeat South Australia buyer Darren Koopman, of Bottlesford stud, was looking for outcross genetics when he secured the $8000 top PTIC Murray Grey cow/calf unit and also paying $7000 for another 3-in-1 cow/calf unit.

“Monterey cattle have excellent growth and are easy-doing,” he said.

Monterey’s PTIC heifer Rejoyce M232, which was sashed junior and grand champion female at the 2017 Perth Royal Show, sold for $7000 to account CL Harris, of Manjimup.

Angus bulls sold to a top of $15,500 with Monterey Mirage M101 setting the benchmark after selling to an undisclosed buyer through Elders Esperance agent Alan Browning. Offered as ¾ share and full possession, the 968kg Mirage was the first son of Millah Murray Docklands J193 offered in Australia and out of a much-admired dam, Monterey Ebony G13. Taking stock out of a Prime Katapault K1 son, Graham Nixon, of Nixon Brothers, New Norcia, secured Monterey Minesweeper M59 for $15,000. “I liked the bull’s low birth weight (33kg) and carcase qualities plus good feet, tidy sheath and shiny coat,” he said. Monterey Matauri M102 sold for $9500 to account RJ & HM Reid, of Nillup.

Returning to the sale to source Angus females, Julie and Terry Earle, of Roesner Nominees, Harvey, who were assisted by Rob Italiano, secured five PTIC cow/calf units to a top of $8000 and average price of $5583. 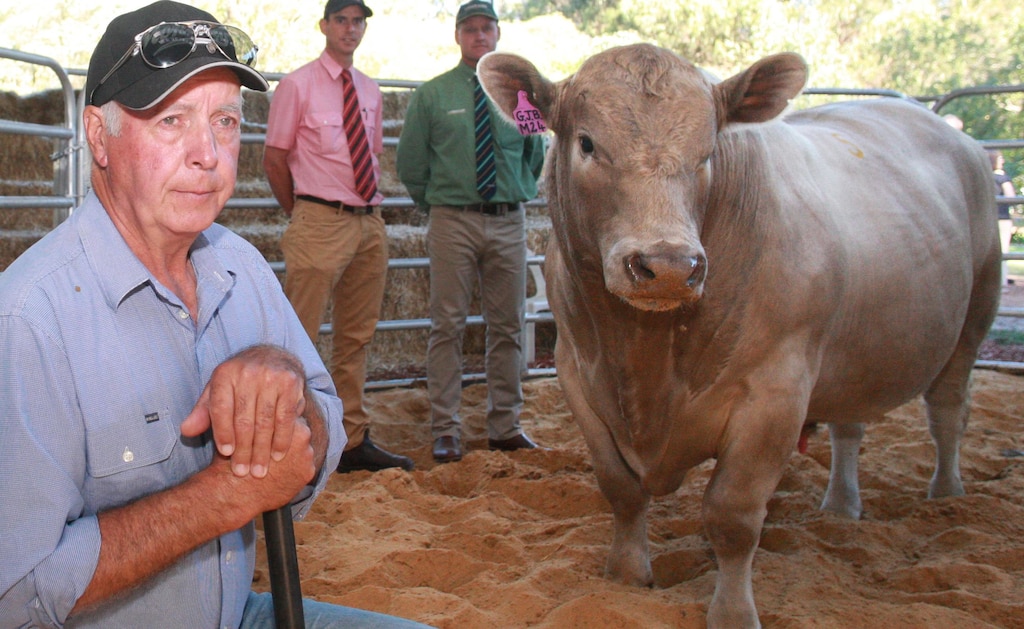 It was another quality line-up of black and grey bulls presented by Tullibardine principals Alastair and Jenny Murray, and once again the stud’s loyal clientele turned up to boost their sire stocks.

Mr Leusciatti was a repeat Tullibardine buyer, with this bull the fourth he had bought from the stud.

“We run 50 Murray Grey breeders and I was looking for a bull that would go over the heifers and smaller cows in the herd,” Mr Leusciatti said.

“We mostly sell calves straight off their mums through the Mt Barker saleyards and we actually topped the sale when we sold them last year.

“Depending what is happening with prices we are happy to keep them and wean them and hold onto them a bit longer if need be.”

This bull, Tullibardine Magnum M20, was a Melaleuca Jeep 52 son and weighed 898kg.

Four bulls made the third top price of $6500 and this included the third bull to be offered, Tullibardine Mars Bar M13, which sold to AW & JA Dell’Anna, Napier.

Merinvale Grazing, Albany, was another buyer to pay $6500 when it was successful on Tullibardine Magician M1.

Merinvale was also successful on another grey, paying $4000 for Tullibardine Mainbreak M90.

The fourth buyer to hit the $6500 mark was another repeat buyer, KW & CR Frost, Kendenup.

The Frosts were also successful on two other bulls paying $5500 and $4000 respectively.

Larussa Assets, Gingin, paid $6000 for one bull, while the Norton family added to their Angus purchase, taking a grey for $4000.

Following the sale auctioneer Tiny Holly said it was a quality line-up of bulls.

“Both the shop window and figures of the bulls stacked up,” Mr Holly said.

“Bulls were presented in their working clothes and were ready to go, but like a lot of sales this year, buyers were selective and the better quality bulls were highly sought after and made very good money.” 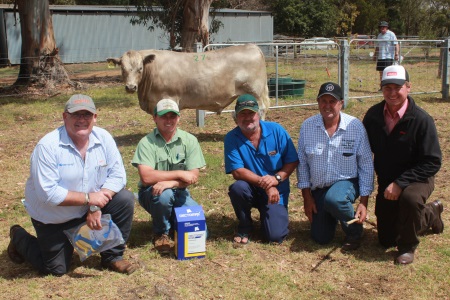 By Courtney Walsh and Kane Chatfield

Following the Poll Hereford line-up, the Murray Grey offering at the 2018 Invitational sale was bolstered by the addition of a new stud presentation to the catalogue meaning there were plenty of upstanding grey sires available for purchase.

Willawa Greys, Newdegate, joined Young Guns, Hyden, to offer a total line-up of 19 Murray Greys on the day, of which 15 sold at auction to an average of $5150.

The well-muscled and balanced quality of the Wheatbelt reared Young Guns bulls took the limelight however, with the very first bull into the ring taking the top-priced Murray Grey gong when RV Epton, Bindoon, went all the way to $7750 to secure it.

The 854kg Young Guns Midas BJL M65 was born in May 2016 by Young Guns Grand Slam and out of one of the elite stud females at Young Guns Maple G77.

The moderate birthweight bull displayed plenty of scale and frame and growth.

Return buyer FS & KM James, Hyden, was one bid shy of equaling the top Murray Grey price when it secured the next bull for $7500.

Young Guns Magnum M28 was another Grand Slam son born early April 2016 and displayed an even set of above average growth and carcase EBVs.

The James family purchased another Young Guns bull for $5000.

Many of those bulls headed back to the Wheatbelt with return buyers from Hyden joined by others from Quairading, Holt Rock, Collie, New Norcia and Wandering to help clear the draft of well-bred Young Guns bulls.

Willawa Greys offering its first line of bulls at the fixture struggled for competition on the five big-framed sires it offered, selling one under the hammer at $4000 to Timbarra Trading Trust, Wandering.

Timbarra also purchased a Young Guns bull for $4000 at the sale. 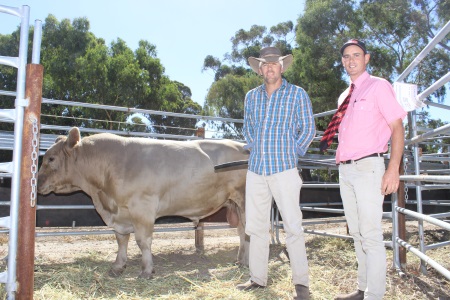 RIDING on the back of an incredible result in the Koojan Hills Angus bull sale on Monday, the Melaleuca Murray Grey bull sale that immediately followed saw all values increase compared to last year.

Ten less bulls were offered by the Metcalfe family in this year’s Melaleuca sale compared to last year with 30 going under the hammer.

Compared to last year there was one more bull sold and the average jumped by $305, while the top price was significantly up on last year’s $6000.

Once again it was a quality line-up of Murray Greys that was appreciated by the small crowd of mostly return buyers that sat through the Angus offering to compete on the greys.

The top price of $9000 came mid-catalogue when Landmark southern livestock manager Bob Pumphrey outlasted the competition to have the final call on Melaleuca Mayor M129.

Mr Pumphrey was taking phone bids on the bull from Tasmanian stud breeder Charles Wallace, Woodbourn stud, based at Cressy.

Mr Wallace said he was in WA a week ago to attend the Tullibardine bull sale, where he bought one Murray Grey bull, and at the same time inspected the Melaleuca line up.

“This bull stood out from the rest,” Mr Wallace said.

“He was too bloody good a bull not to have with his outlook, thickness, good feet and excellent figures.

“I have been very pleased with the bulls I have bought from WA in the past and I expect this one to be no different.”

Mayor was looked at by Melaleuca principal Richard Metcalfe as a potential stud sire, but was put in the sale because the Metcalfe family had kept the pick of its sons from last year’s calf drop.

Another bull to make good money was the first bull of the sale offered with another repeat buyer, TA & TL Bradshaw, Kojaneerup South, paying $7000.

Melaleuca Marley M4 was a March 3 drop silver bull that was sired by Melaleuca Hakea H202.

The Bradshaw family was the volume buyer of the sale taking three bulls in total and paying $4000 apiece for their other two purchases.

Also taking multiple bulls was Salamar Pty Ltd, Claremont, which picked up two at a top of $4500.

Rumbalara Pastoral Co, Gnowellen, bought one for $4500, as did TS & KH Meir, Albany.

Landmark auctioneer Tiny Holly said while the Angus wave had impacted on demand for Murray Greys in recent years, it was pleasing for the Melaleuca stud to have an increase in average compared to last year.

“The quality of the Murray Grey line-up was exceptional and the fact that there were many repeat buyers in attendance again today shows the bulls are working in the paddock where it counts,” Mr Holly said. 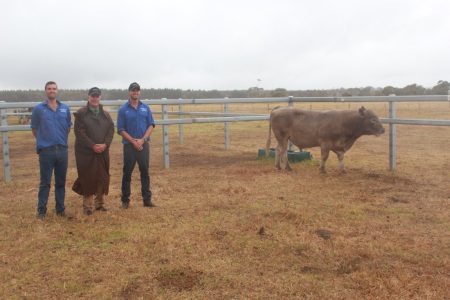 The Lindsay Murray Grey production sale last week achieved a terrific result backing up from last years’ record sale. The stud sold 26 of 32 bulls to a top of $16,000 and an average of $7307.

Reaching the top price was Lot 27, Lindsay Magnus M83, a soft grey son of Lindsay Holster H27. Magnus was offered with Lindsay retaining ¼ semen share and was brought forward in the catalogue due to significant interest.

Lindsay Machette M132 was secured by long time repeat clients, Cavanagh P/Ship for $15,500 along with Lot 6, Lindsay Marlboro M6 @ $12,000 for their commercial operation at Keith SA.

Lot 3, Lindsay Mojo M9 has stud duties to perform after being purchased by Woodbourn Murray Greys stud, Cressy in Tasmania, after impressing all with his overall quality, depth of body and soft fleshing.

Two further bulls were sold immediately after the sale.

36 of 41 high quality PTIC commercial heifers cleared to a top of $2300 to Neville Brain Portland and achieved an overall average of $2058.

The 38th consecutive Lindsay sale was conducted by Landmark and Elders Casterton. 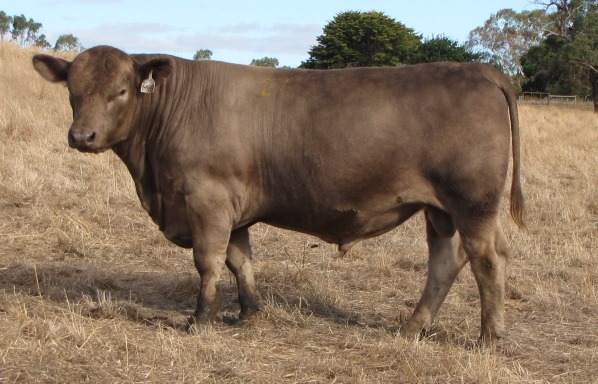