Ayr Park Murray Grey stud, at Woodstock in NSW, also bid at the top of the catalogue, paying $10,000 for a new sire.

Woodbourn principal Charles Wallace said the average was “fantastic” and it showed the breed was going forward.

The stud also offered 46 ­females, including a line of 10 stud females with calves and most pregnancy tested in calf, averaging $5889.

The top-priced female was Woodbourn Evita H99, which was sold with a heifer calf and was bought by Brian Claridge, from Claridge Farming at Caveside, Tas.

Joined heifers were also in demand, and the 20 sold made an average price of $2450.

NSW buyers also picked up the highest priced lots at the Island State Murray Grey sale at Powranna on Monday.

Top price at the sale was $9000, for a Wiltshire Murray Grey bull, Wynyard, bought by Brian Benson from Dubbo, in NSW.

The Elbern stud at Stanley sold a cow and calf package to Elizabeth Fields Murray Greys, at Yass in NSW, for $5000. 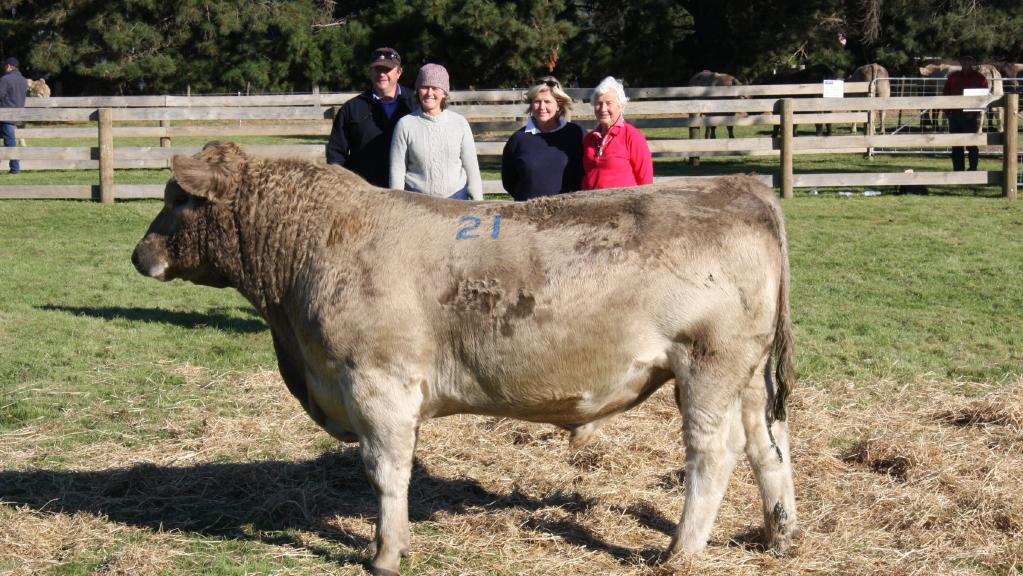 Monterey principals Gary and Julie Buller decided to reduce the size of their female stud herd after a lease expiry of a neighbouring 243ha property.

Mr Buller said Miss Kuri was sired by Monterey Hamersley H204 (top of its drop) and its dam, Miss Kuri H182, was pregnancy-tested-in-calf to Monterey Fleetwood F309. Shell-Dee also paid $3800 for Monterey Lolita F139 with a heifer calf at foot.

Later in the catalogue during the offering of 34 Murray Grey cows (some PTIC) David Corker, of Bullco Genetics, Boyup Brook, paid $6800 for Monterey Miss Opal, a six-year-old Murray Grey cow with a five-day-old bull calf at foot.

Mr Corker said he would add the cow into his Wundam Park Murray Grey stud herd and had high hopes for the bull calf.

Landmark agent Michael Lynch, who assisted, said Mr Tomlinson was in the process of registering a Murray Grey stud. In the Angus catalogue, Julie and Terry Earle, of Roesner Nominees, Harvey, secured the $6200 top-priced cow, Monterey Stella, a seven-year-old with a bull calf-at-foot.

The cow was sired by Lawsons Gar Direction X3 A423 and out of Monterey Stella A66.

Mr Buller said the cow has plenty of length, frame, width and volume and the bull calf was sired by Koojan Hills Unlimited F237.

The Earles, who were assisted by Rob Italiano, bought another Angus cow/calf unit for $4000 and also secured 9 PTIC commercial cows for an average price of $3967. 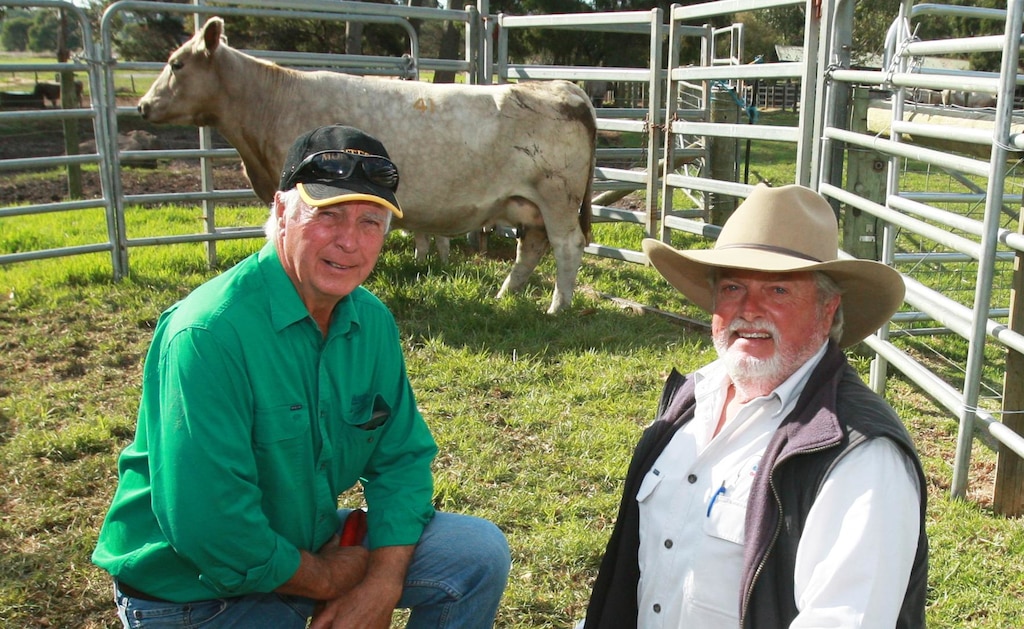 The annual event, conducted by Elders, Landmark and Primaries, offered 49 bulls in total.

Lindsay Bagshaw, of Young Guns Murray Grey stud, Hyden, offered a team of 16 bulls, with 12 selling to a stud record top price of $9500.

Mr Bagshaw said Lusty had colossal volume, great length and was very sound and structurally correct, and would breed true to type like its sire, YG Grand Slam.

“Lusty’s dam (YG Primrose U7) has been very successful in the stud,” he said.

Seven buyers were bidding on the Murray Grey catalogue, with three new buyers securing bulls, including account P and A Alvaro, of Merredin, which paid $5750 for YG Las Vegas L45.

Another $5750 equal second top-priced bull, YG Leroy L22, was bought by repeat buyer BW James and Sons, of Hyden, who secured a total of five Young Guns bulls for an average of $4550.

Account FS and KM James, of Hyden, bought two bulls for $5000 each. Mr Bagshaw said he recently inspected Frank James’ commercial herd. “The progeny going back to Young Guns bulls all looked very productive and even,” he said.

The stud achieved a record average price of $7306 for 40 bulls at the sale, in the Buller family’s undercover selling complex.

In his opening address, Monterey stud principal Gary Buller acknowledged his loyal supporters and said he was very pleased with how the stud’s bulls presented so evenly throughout the catalogue.

“Many of our very first bull buyers, including the Foster family, are here today,” he said.

As the crowd of visitors, including 83 registered buyers, filled the new complex, first-time attendee Rick Casagrande, of Ferguson Valley, was there for one reason.

Mr Casagrande was there to secure his first pick, Monterey Liquid Gold L79, which sold for the top price of $18,750.

As owner of Hot Weld in Bunbury, Mr Casagrande is a relatively new entrant into beef production.

“My aim is to build a registered Murray Grey herd with as much integrity as I have put into my steel fabrication business,” he said.

Assisted by Elders agent Mal Barnett, Mr Casagrande selected the bull for its excellent temperament and for being true to type.

“It is well balanced for such a big bull,” Mr Barnett said.

“The bull will go to work in a herd of 45 cows to breed replacement females.”

Liquid Gold, which weighed 872kg, was sired by Monterey Brandy Boy H4 and recorded Estimated Breeding Values of +59 and +91 for 400 and 600-day weights, respectively, both of which were in the top one per cent of the breed.

For all Murray Grey calves born in Australia and recorded for EBV EU Heavy Steer Index, Liquid Gold was rated number two in the country with a score of +89.

The second top-price Murray Grey bull sold to repeat buyer Chris Avery, of Scott River, for $13,750. The 844kg bull was sired by Monterey Megaforce and also recorded in the top one to 5 per cent for EBV growth. The Avery family also paid $13,000 for a bull sired by Monterey Hunza H42.

While one of Mr Buller’s top picks, Monterey Kalahari K304, did not reach a reserve price and was passed in at $12,000, account Silverstone, of Narrikup, secured a $13,500 bull, Monterey Luxembourg L69, through Landmark agent Jamie Abbs.

After the sale, Silverstone paid $14,000 for Kalahari through private negotiation.

In the Angus bull catalogue, Mr Forrester secured his first Monterey bulls, paying the $11,500 top price for Monterey Leader L56 and another two Angus bulls for $8500 and $4000.

Mr Forrester’s first pick, Monterey Leader L56, weighed the heaviest at 946kg and was one of Mr Buller’s top picks.

Sired by Carenda Stockman D34, Mr Buller described the bull as having terrific growth and weight for age.

Mr Forrester said he recently bought two properties in Esperance where he plans to run Angus breeders and expand his organic beef enterprise.

The underbidder on Leader L56, Ms Alexander said she liked the sirey outlook of Monterey Lucky L150. The bull was out of Monterey Serene D128, which was described as an exceptional female. “Previously, I bought Monterey Angus cows and was pleased to return for a bull this year,” she said.

Account Gypsy Hill secured an Angus bull for $10,000, while Telina Downs, of Esperance, bought another for $8250.

In the female section of the sale, a pregnancy tested in-calf cow-calf unit sold for $7500 to NSW stud Hunter Valley.

The cow, Monterey Miss Katrina H62, was sired by Monterey Megaforce and was described as lovely natured with a top-quality bull calf at foot. 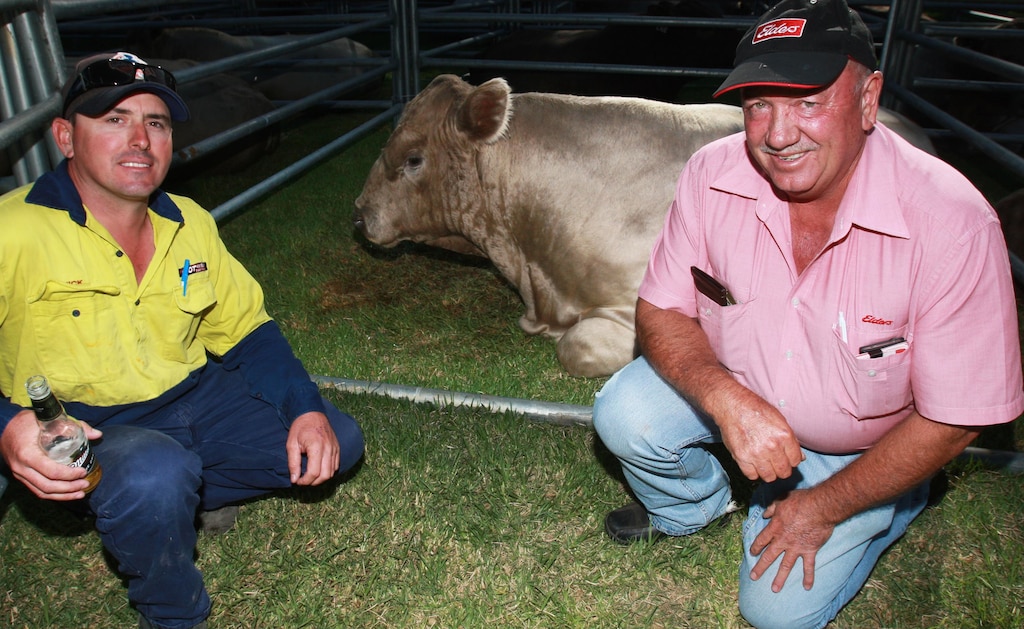