It was an outstanding result for Southend Murray Grey stud principal Kurt Wise and his extended family at the stud’s 21st annual on-property sale at Katanning last week.

Thirty one potential buyers registered for the 35 bulls and 59 heifers on offer.

Of the 35 bulls catalogued, 30 were registered two-year-olds and five were unregistered yearlings, while 10 yearling stud heifers and 49 yearling commercial heifers were also offered.

Based on the results and the comments made by successful purchasers, the type and quality was just what they wanted and the average price for the bulls was up close on $480 on last year’s sale and the heifers were up by just under $350.

Adding to this very positive result was a record top price set for the stud at $17,500.

The first of the bull catalogue into the selling ring, Southend Lucas, just rising two years and out of heifer Southend H-Gemstone AI joined to Kelso Cracker, came with excellent credentials based on its EBVs and scan data.

Its recent scan data was EMA 124cm 2, IMF 6.4, P8 and rib fats 13mm and a current bodyweight of 942 kilograms and 42 centimetre scrotal measurement.

Elders auctioneer Gary Preston received an opening bid of $5000 and bidding then became quite brisk until it was down to two bidders when finally at $17,500 it was knocked down to Boyup Brook commercial clients Rob Bass and Kerry Pinch who were delighted with their new sire.

Mr Bass said they run a commercial herd of about 120 mainly grey females based on Southend bulls over the past 14 years.

He said Lucas was just right for their herd and would use him to breed females.

Earlier in the sale they had also bought six yearling heifers at up to $1600.

The second bull into the ring Southend Lara also had very impressive figures throughout and had earlier impressed Kurt Wise to the extent he used it in the stud’s 2016 joinings for a short time.

Again there was good bidding competition and at the sale’s second top price of $8500 was knocked down to Graham Bell, GE Bell, Porongurup.

Losing bidder on the two top-priced bulls was another regular buyer of Southend bulls, Ray Farmer, Charles Farmer Family Trust, Boddington, who went on to purchase at $5500 the third bull into the ring which had also been used in the 2016 joining.

Also very pleasing for Mr Wise and his family is a bull heading east.

They had earlier introduced Tullibardine blood into their stud and with lot eight in this year’s sale by Tullibardine Hellraiser, they were also very impressed with its positive EMA of 122cm2 and other figures along with its natural doing ability, weight for age and softness and balance.

Under some keen competition they went to $7000 and later were delighted to have secured it.

One of the prominent buyers throughout the entire sale was Nathan Baynes, NP & NM Baynes, Katanning.

Nathan and his wife Nicole run a pure Murray Grey commercial herd based on Southend bloodlines on their Badgebup property.

Gradually building up numbers, Mr Baynes bought two 2015-drop bulls at up to $6500 and one yearling bull at $3500 and was also the major buyer in the heifer offering getting one stud heifer at $1500 along with six lines of five commercial heifers also at $1500 per head.

The offering of five unregistered yearling bulls saw two sell at $3750, one going to AG Hambley, Brookton, the other to Twiga Farm, Kojonup, and another also sold at $3500.

First offered through the selling ring prior to the catalogue of bulls were 10 stud registered yearling heifers followed by nine lines of five and one of four 2016-drop commercial heifers.

The major buyer of the registered 2016-drop heifers was Joe Della Vedova, JLW & C Della Vedova, Esperance, who paid up to $2800 for one of the six heifers purchased and later securing one of the 2015-drop bulls at $4500.

Two other stud heifers at up to $1700 went to Eric Penny, EJ Penny, Yarloop, who also bought a pen of five yearling commercial heifers and another five heifers went to Henco Rural, Donnybrook.

Given the overall result, stud principal Kurt Wise said he was somewhat overwhelmed and looks forward to breeding quality offerings in the years to come to present to the beef industry.

Elders auctioneer Gary Preston commented it was a top presentation of excellent quality bulls and heifers and an absolute credit to Mr Wise and his family and well received by those buyers who turned up for the sale as indicated by the values paid. 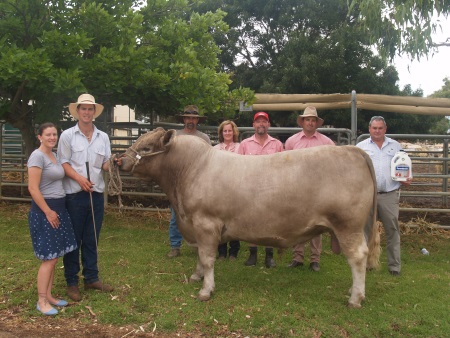 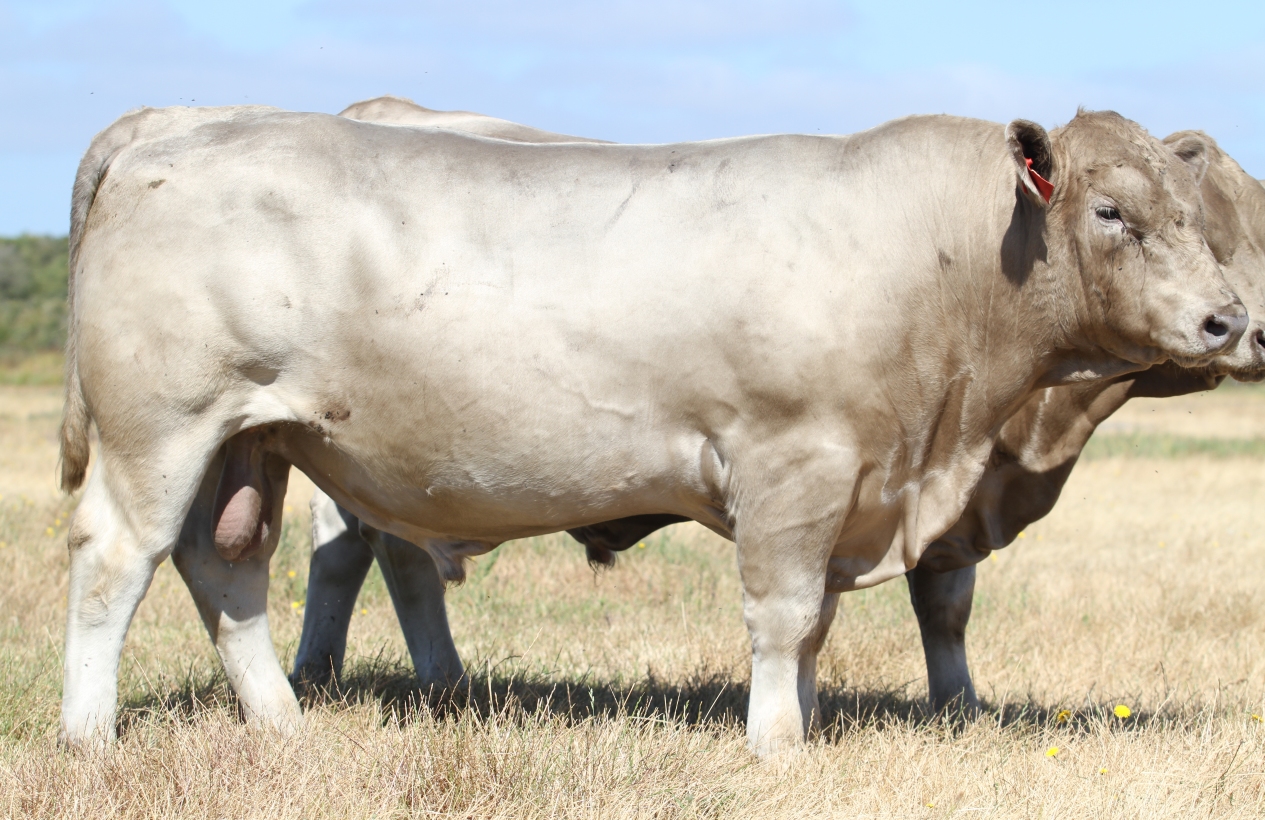 BUYERS from throughout SA were in the box seat at the Green Triangle sale at Western Flat.
Vendors Geoff and Kate Buick, Arki stud, and Anthony and Denise Fabris,
Beeamma stud, put up their best offering in the sale’s six year history.

A great mix of repeat and new clients being active buyers, were we offered 25 bulls to with a  clearance rate of 60%.

Second top price Lot 12 Arki Kane K31  selling for $4500.  The bull which was in the top 10pc for carcase weight and vealer index, sold to Fleurieua peninsula  buyers WH,BE&WE Banning.
There was a total clearance of the female section 32 commercial females. Lot 1 a pen 4 rising 30 month old mated heifers from Arki Stud at $1600 to NB&BJ Baker, of Mount Gambier.
Elders auctioneer Tom Dennis said it was “one of the superior Murray Grey offerings in southern Australia”. 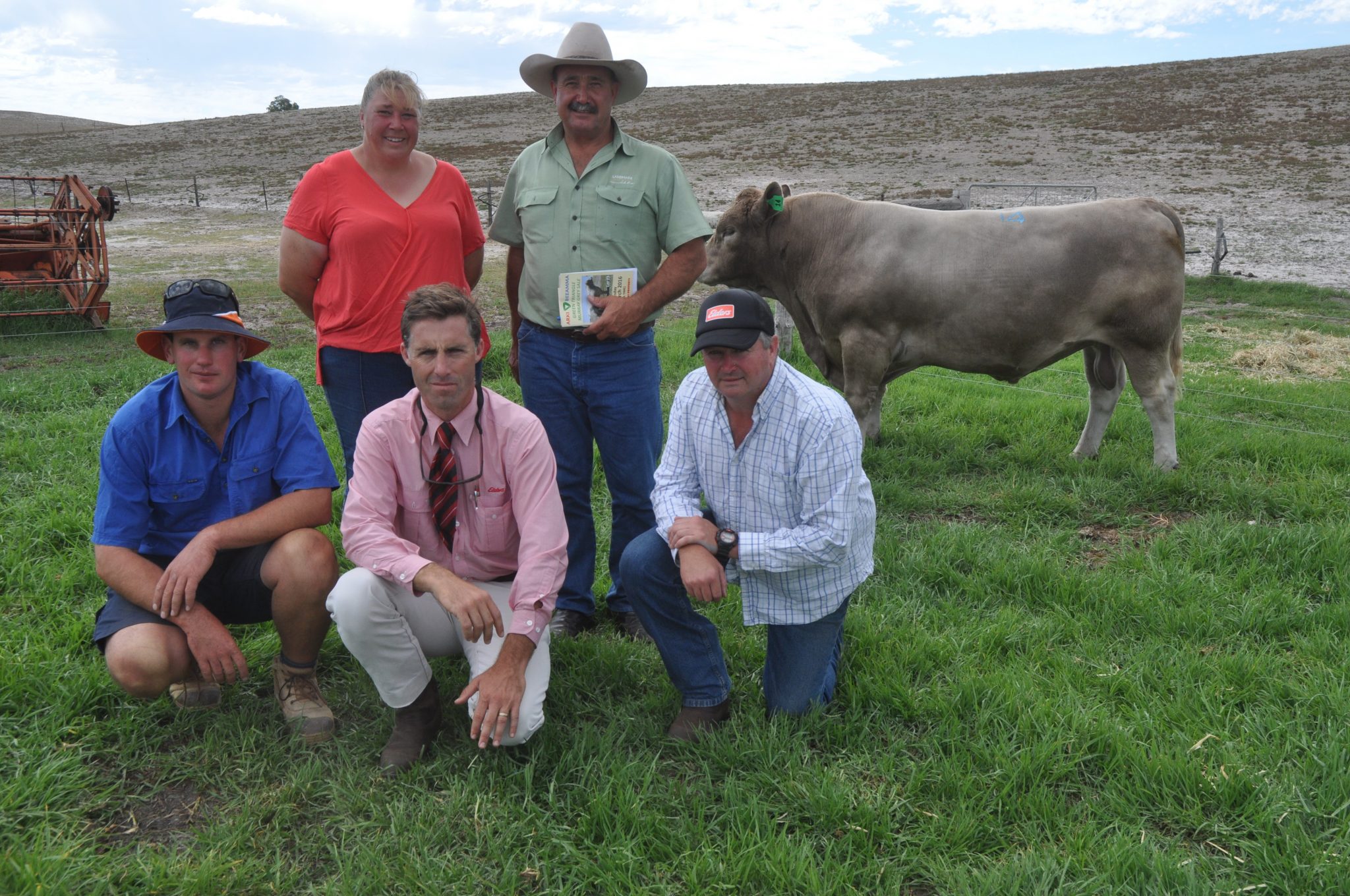 November 4, 2016
After a break for 12 months the premier multi vendor sale was held again at the Wodonga exhibition centre on 26th October with 11 vendors, from 5 states  Vic , NSW, WA, SA and Tas.
22 cows /calves, 9 heifers and 9 bulls. For the first time  commercial pens were introduced  having 23 head offered for sale.
Top price female Lot 6 Monterey Magnolia H23 with a heifer calf at foot sold to G & L Connelly of Ulverstone Tas for $7500.00.  Not far behind was the second top priced cows being Lot 3 Lot 13 and Lot 16, for $6000.00. 20 cows/calves were offered 16 sold to an average of $4140.00.
Top price heifer was Lot 23 Cratloe Linda K1 for $3000.00 sold to Lucy Kell Snowy Mountain Murray Grey Stud of Adelong NSW. 9 offered  8 sold, to an average $2468.00.
Top price bull was Lot 36 Elbern Landmark for $6000.00 sold to Cadella Stud of Castlemaine Vic. 9 Bulls offered 6 sold to an average of $4166.00.
We decided to introduce pens of commercial cows and heifers this year, which turned out to be a great opportunity for the premier sale to up our numbers and draw the commercial people to the sale. A total clearance was seen with 13 cows and calves and 10 heifers go before the hammer.  Lot 41 from Dajory Murray Grey Stud, a pen of 5 cows/calves topped at 2250.00 to RD & DJ Gamble of Maruya NSW to average $1945.00. Unmated pens of Heifers Lot 42 Dajory Murray Grey Stud, a pen of 5 heifers topped at $2300.00 to average $1900.00.
The Vendors all need to be recognised and congratulated for putting together a very high standard of cattle. We would like to thank the bidders and under bidders for your support, also the 2 agents John Atkins from Atkins marketing and Jim Bruce and Matt Tinkler from Elders for your help in running the premier sale.
We Look forward to next years sale being in October 2017, to be bigger and better again. If you need more information contact Geoff Buick 0438 582 071 or the secretary Denise Fabris on 0407 566 341.

Black Factor dominated the fourth Cam Grove on property bull sale. Twenty five silver, grey, and blacks were offered with fifteen selling under the Helmsman auction method.  Over half those sold were black factor.

Top seller was a black factor, Lot 6, Cam Grove Xman L16, who ,after a bidding battle between two well known Australian Murray Grey studs, was finally knocked down to the Cadfor Murray Grey Stud for fifteen thousand dollars. L16 was described by Cam Grove principal, John Young, as having EBV’s “as near perfect as we can get” with Supermarket and EU indexes in the top 1%.  He also had the heaviest weight of his group at 665kg one month prior to sale.

Monterey was another Australian stud to purchase a black factor. Their choice was Lot 8, Cam Grove Licorice L29, for four thousand dollars.

The sale was conducted by Bernard Atkins of Atkins Livestock Services.