Harvey Beef was back at the IGA Perth Royal Show cattle auction to support WA’s cattle breeders who were responsible for the 76 entries in the led steer and heifer competition and sale.

The Forrest family, who own the beef processing company, dug deep in their pockets to secure the $8000 top price, with all proceeds going to the Black Dog Ride Charity Steer, an organisation that supports good mental health programs.

The charity steer, a 526kg Murray Grey entry, was donated by Alastair and Jenny Murray, of Tullibardine stud, Albany, and prepared by Peter Milton, of Dardanup.

Harvey Beef general manager livestock Kim McDougall was also bidding on behalf of Coles when he paid the $7900 second top-price for a 544kg Limousin cross Red Angus steer, which was bred by Charlie and Lucy Dimasi and prepared by their son Gary Dimasi, of Paradise Beef, Donnybrook.

Gary said he bought the steer from his parents’ Grow Safe farm and finished it into a heavyweight show entry from his family’s feedlot.

“We were very pleased the steer was sashed with the grand champion led ribbon after it was judged the best (champion) extra heavyweight entry,” Gary said.

Earlier at the led steer and heifer competition, judge Sean Kallady, of Gippsland, Victoria, said the red steer was a complete package.

“He walks around the ring with a ripple effect with his loose skin and shine showing his carcase meat will be healthy and full of quality,” he said.

“The reserve grand champion will also cut up the flank good enough for the dinner plate,” he said.

Mr McDougall paid $3200 for Kelmscott’s Angus, saying that the Forrest family were very pleased to support the agricultural schools throughout the State.

“Overall the quality at the sale was outstanding and I would like to acknowledge that the cattle were a very even line for weights and consistency of types which suits the Harvey Beef commercial requirements,” he said.

Mr McDougall bought 10 head of cattle for Harvey Beef and 11 head on behalf of Coles.

Perth wholesale butcher Johnson Meats, located at Midland, paid the extra premium of $3000 and $2800 for broad ribbon-winning led cattle, exhibited by Murdoch University, before securing another 12 head for an average price of $1492.

Johnson Meats principal Terry Russell, who said he would be handing over the business to his son, Justin, said he paid a premium for top-end quality with most comparable to current market prices.

“It has been a couple of tough years with high cattle prices, but the values have adjusted lower in the last few months with an influx of oversupply from the Eastern States,” he said.

Michael Borrello, of Borrello Group, High Wycombe, who was the under-bidder on the top-priced steer, bought 14 head for an average $1421.

“The current challenge as a meat processor is to adjust to the current oversupply market,” he said.

Swansea Meats principals Graham and Helen Goddard-Borger, of East Victoria Park, bought 10 head of cattle for an average price of $1510.

“We were selecting for animals that paid in meat yield,” Ms Goddard-Borger said.

A new breed to appear at the led competition and sale was from Robert Smith, of Narrikup, who exhibited two pure Sussex steers, with both selling for $1500 and $1400/head.

Mr McDougall, who bought one of the Sussex steers, said the breed was worth taking notice of. 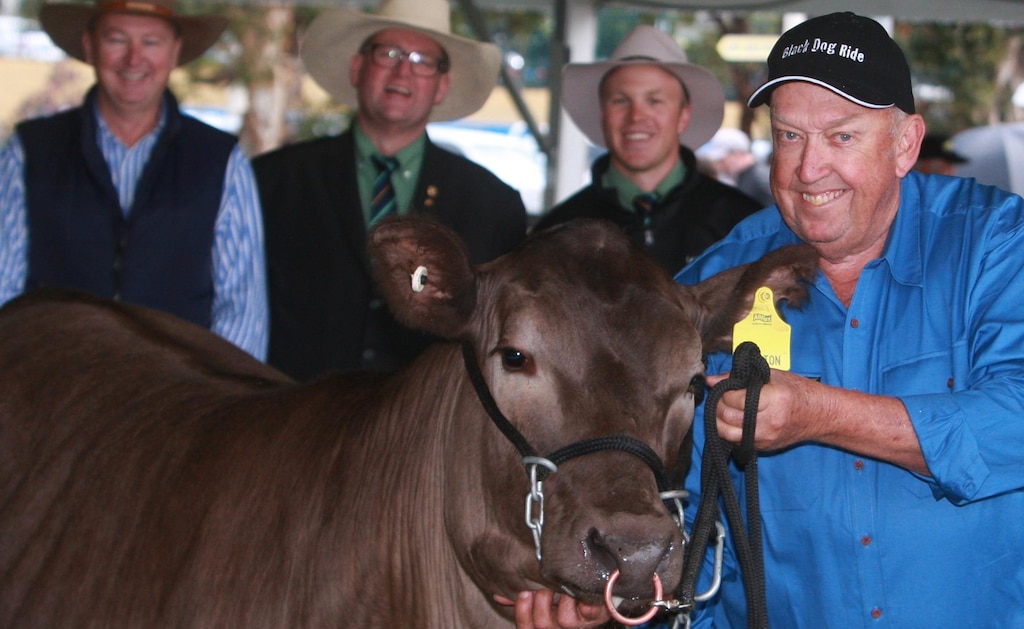